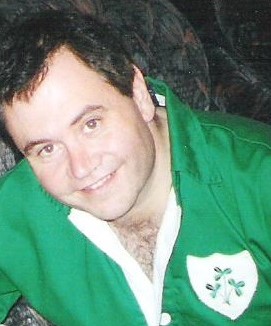 Regular readers would have noticed that I have been fairly quiet lately. Please don't worry, I haven't given up writing this blog; I plan to return in 2018 with lots more articles. In the meantime, please keep checking in. And a follow would be much appreciated, thank you.

I would like to thank you for reading my blog and wish you all a wonderful new year.

John
Posted by Moanaghan Man at 12:16 No comments:

It’s the time of year when awards are handed out like flyers at a world championship for leaflet distributors. It does make sense that accolades are presented at the end of a year – I think the Psychic Association is the only organisation that held their 2017 awards in January. I’m going to give my own ‘honours’ for the year. My Nearly Awards are for those who thought they had achieved something big, when, in fact, they hadn’t. Read on and it will all become clear.
First up, I’d like to give a Nearly Award to everyone associated with the movie La La Land. These people thought they had won the 2017 Oscar for best picture after they were announced as the winners. However, a mistake had been made; Moonlight had won. It meant limelight for Moonlight and boohoo land for La La Land.

We move north of South Africa to Zimbabwe for our final recipient. For a while, the country’s military appeared to be Nearly Award winners. They had staged a coup to oust President Mugabe, and at first, it looked like the best coup ever, as the majority of Zimbabweans supported their army and there was little trouble. In fact, the only trouble they had was the fact that President Mugabe remained in power. Mugabe eventually resigned, but for nearly staying on as president, he gets a Nearly Award.

That’s my Nearly Awards for 2017. You will not be surprised to learn that no ‘winner’ turned up in person to collect their prize. They didn’t even nearly make it – which is apt, I suppose.

Posted by Moanaghan Man at 09:49 No comments:

My apologies for not posting this week. I've suffered a family bereavement and feel it is inappropriate to post humour at this sad time. I intend to add more pieces very soon, so please keep checking.

John
Posted by Moanaghan Man at 14:14 No comments:

My Review of The Walking Dead

In this piece, I’m going to review the US television show The Walking Dead. I say review, this is probably unlike any other analysis of the programme you’ve ever read. That said, if this is a success, I might review more shows.

The Walking Dead takes place in a post-apocalyptic world. Everything’s in chaos; just imagine it’s the day after Saint Patrick’s Day – it’s that messy. The central government doesn’t appear to be in control – so nothing new there.

To make matters worse, the place is overrun by ‘walkers’. The walkers are living dead, so in a way, they’re like accountants (although accountants are much scarier). The walkers might look frightening, but they don’t move very fast. In fact, the show should be called Walking Dead Slow.

As you can imagine, it’s tough being a living person in this scenario. Not only are the walkers after you, some living people from other groups don’t like you much either. It’s difficult to relax, especially if the only DVD you have to watch is Night of the Living Dead.

Overall view: I’d like to say that The Walking Dead is an exercise in existentialism – mainly because it makes me look clever.

The following are some actual news items (from early 2017, and September/October 2017) that you may have missed. I’ve added a humorous spin.


The UK agrees on defence deal with Turkey; the turkey says fighter jets are an unnecessary deterrent against foxes.

As the Internet Movie Database announces it is to close down its message boards, one contributor asks: “Did anyone else see this twist coming?”

Prison is driving a thief nicknamed “Spiderman” up the wall but he hasn’t made it to the ceiling yet.

Disappointed IT nerds demand a refund after watching horror movie It.

Brexit news, and as the UK’s Trades Union Congress accuses the Prime Minister of having a ‘Santa wish list’, Britain says its top three demands from Europe are border control, free trade, and a scooter.

Police confirm euros flushed down a toilet in Geneva are not real; they are, in fact, a new kind of Swiss roll – a Swiss bog roll.

A supermarket’s profits fall despite record sales. A company spokesperson says a solution to this problem would be to sell more records.

US scientists win the Nobel Prize after solving how our bodies tell time. My body tells the time by looking at my watch with my eyes.

Bags for life can make you ill – so please don’t eat them.
….

Posted by Moanaghan Man at 17:18 No comments:

I think I’ve found the easiest job in the world (apart from being a voice coach to a mime artist). The job is... a scientist. To demonstrate, let me tell you about two scientists who achieved greatness with a minimum of effort.

The first person I’ll write about was a Greek from ancient times called Archimedes. Straight off, you can tell this guy is special – he’s so famous, he only needs one name. Just like Bono, Bjork, and Bambi. Archimedes is famous because he had a bath. I’ll elaborate; he had a bath and discovered two things. The first was water makes you wet. His second discovery was that the water level in a bath rises when you get into the bath. It gets a bit complicated after that; let’s just say he went on to have many more achievements. I’m sure he didn’t invent the rubber duck, however.

The second scientist I will write about is Alexander Graham Fleming. Don’t let the fact that he has three names put you off. Just think of him as the Sarah Jessica Parker of boffins. Besides, Archimedes may have had one name, but he didn’t win the Nobel Prize, did he? Mr Fleming did win it by making a mistake, waiting a while, and then letting others do the work. Told you scientists had it easy. He wasn’t even trying to discover penicillin when he discovered it. He discovered the antibiotic by accident. I would guess the original name for penicillin was ‘Oops!’ Other people including Ernst Boris Chain and Howard Florey continued Fleming’s work and in 1945 all three won the Nobel Prize.

There you have it, Archimedes and Alexander Fleming became famous by simply taking a bath in the former’s case and by making a mistake in the latter. I wash and make mistakes all the time and yet the nearest I’ve come to any kind of eminence is listening to Eminem. Maybe I should take up science. Or at least wash and make mistakes more often.

Posted by Moanaghan Man at 17:33 No comments:

The piece below won a Carillon Readers’ Bookmark Competition in for me a few years ago. Sadly, this brilliant writing magazine is due to cease publication shortly. If you would like to learn more about Carillon, please visit its website at http://www.carillonmag.co.uk/

For the competition, I had to write a letter of excuse for something. The following (which has been slightly edited) was my effort.

I realise Sheffield City Council is rather annoyed with me over my failure to pay a parking fine. However, I think you should hear my side of the story before you judge me. It all started when I fell in love with a woman. She was out of this world. Literally. You see, she was from another planet. I was smitten the moment I looked into her eyes. All three of them.

The romance grew and everything was going well until I decided to take her to a Sheffield United match. Big mistake. Not only did the experience put her off football, it turned her against me, the human race, the whole world (and Bramall Lane pork pies). She was so angry that she threatened to obliterate the planet with her spaceship’s laser.

I reminded her that the spaceship had been parked on a double yellow line for weeks. I offered to pay the ticket if she promised not to destroy Earth. She agreed, and then flew off to steal cattle hearts in Arizona, instead of human ones in Yorkshire.

I am left alone, and with a fine that doesn’t really belong to me. However, as my astuteness has saved the planet, I hope you’ll do the right thing and let me off. Indeed, is there any chance of a reward?

Posted by Moanaghan Man at 17:39 No comments: